I’m thrilled to share Quill & Quire‘s feature on Greystone Kids, out today online and in the July/August issue of the print edition (also the Children’s Fall Preview edition). I want to thank everyone who helped make this feature possible: Kallie, Sara, Patsy, and Rob, who all took time out of their busy days to provide quotes. I love Rob’s final quote in the piece: “We are definitely going to break the rules.” Yeah!

Full text for those without a sign-in:

Ask Greystone Books publisher Rob Sanders about the new Greystone Kids imprint, and the word “serendipity” comes up a lot. Though Greystone – the former Douglas & McIntyre imprint that rose from the ashes of the D&M bankruptcy in 2012 – has released a select number of children’s titles over the years (most notably in partnership with the David Suzuki Institute), Sanders says it was a combination of the right people coming together at the right time to see the children’s division become a reality. 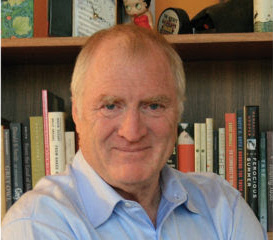 “When I started up Greystone again in 2013, I actually had the idea that we might look at developing a little kids’ imprint down the road,” says Sanders. “Then one person led to another person; old relationships became new again. If you stick around the planet long enough, you get to know enough people that you can make things happen.”

The first right-person, right-time connection was with children’s author Kallie George, a former editor at Simply Read Books, who mentioned to Sanders she was looking to flex her editing muscles again. Next, Peter Wohlleben, the German author of Greystone bestsellers The Hidden Life of Trees and The Inner Life of Animals, expressed a desire to write for kids. With George on board as picture-book editor and the opportunity to build a fall season around Wohlleben’s middle-grade non-fiction Can You Hear the Trees Talking?, Greystone Kids was happening.

Knowing a children’s division would demand a certain creative eye, George approached her old friend, author-illustrator Sara Gillingham. A former design director at Chronicle Books, Gillingham had moved back to Vancouver from San Francisco and agreed to take on the role of consulting creative director. George also reached out to Cree-Métis author-illustrator Julie Flett, with whom she’d worked on the picture books Wild Berries and Owls See Clearly at Night while at Simply Read. Based loosely on an experience of Flett’s when she was a young girl, Birdsong became another key title in Greystone Kids’ fall 2019 catalogue.

Around the same time, Sanders started chatting with his friend and former colleague Patricia Aldana. Sanders asked if she might be interested in launching her own imprint-within-an-imprint as part of Greystone Kids. Facing the end of a five-year contract working with the largest state-owned children’s publisher in China – which she’d undertaken after leaving her role as publisher of Groundwood Books in 2013 – Aldana’s interest was piqued. The result is Aldana Libros, which will bring international titles to the North American market, starting with The Moose of Ewenki, written by Inner Mongolian author Gerelchimeg Blackcrane and illustrated by Chinese artist Jiu Er.

Aldana says joining forces with Sanders was a matter of timing, but also like-mindedness. “There’s a real compatibility in terms of the kinds of books we want to do,” says Aldana. “Not just beautiful, pretty books, but books with really substantial content that open children’s eyes to the world.”

With plans to release 10 to 15 books a year under Greystone Kids, and another four to five international titles under the Aldana Libros banner, Sanders says the themes in the children’s imprint will be very much in keeping with the Greystone ethos: books about the natural world, ethical and social justice issues, and the environment and ecology. In addition to these core tenets, George is focusing on diversity and says that cultivating new artists and authors is an important aspect of her acquisition process. “Small houses can really help support up-and-coming talent,” says George, “and I would love them to make Greystone Kids a home.”

Though Sanders envisions this new imprint primarily publishing picture books and middle-grade non-fiction, at this early stage in the division’s development, it’s fair to say things are still in a nebulous zone. “We are definitely going to break the rules,” says Sanders. “There are interesting things coming.”