Read + Co Books > Drop-in Title: The Pocket Guide to The Unheralded Artists of BC Series 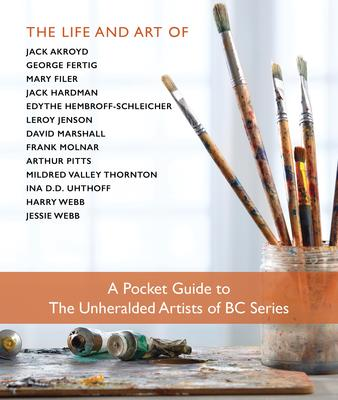 One title was missed in the fall HGD catalogue! Coming in October, this is a new format pocket guide to the Unheralded Artists of BC. It includes an outstanding introduction by Marsha Lederman. Be sure to include it on your next HGD order. More info below.

A valuable art history guide to the in-depth Unheralded Artists of BC series.

This small attractive full-colour book, will gather thirteen forgotten and accomplished artists from the acclaimed Unheralded Artists of BC series (ten books), in one place, for the first time. A summary of each artist’s life and art from the early 1900’s to the 1980s, will tempt art and history lovers to investigate the in-depth series more fully. In British Columbia between 1900 and the 1960s over 16,000 artists worked and lived. It was the height of an immense creative surge in the province. Beyond the handful of names of successful artists there is little documented evidence of the other artists of those times. Art was made invisible by socioeconomic or political forces and also by a lack of public galleries. “Those artists that worked the system got recognition and those that didn’t, disappeared from view.”–Lorna Farrell-Ward, former curator at the Vancouver Art Gallery

Mona Fertig’s father, George Fertig (1915-1983), was one of the unheralded artists of BC and she grew up acutely aware of the politics of art. The Life and Art of George Fertig took her 15 years to research and write. This led her to publish the UABC series, written by authors; Adrienne Brown, Peter Busby, Claudia Cornwall, Christina Johnson-Dean, Eve Lazarus, Kerry Mason, Wendy-Newbold Patterson, Sheryl Salloum and Monika Ullmann. Fertig was made a Vancouver Literary Landmark in 2017. There was a retrospective of George Fertig’s work at the Burnaby Art Gallery in 2010.

Marsha Lederman is the Western Arts Correspondent for The Globe and Mail. Before joining The Globe in 2007, Marsha worked for CBC Radio, mostly in Toronto, where she held a variety of positions, including National Arts Reporter. Prior to that, Marsha worked for many years in private radio as a reporter, news anchor and talk show host. Marsha was born and raised in Toronto and has lived in Vancouver since 2007.