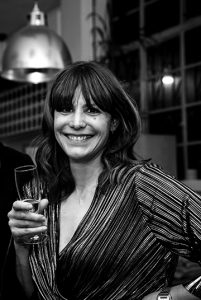 Bridget Clark has been a book publishing professional for over 20 years. After graduating from the University of Victoria with a BA in English, she moved to Vancouver and started a part-time gig at the about-to-open Bollum’s Books, while filing papers at a chemical company during the day.

After a brisk induction into the ways of the book industry, she realized that this was where she was meant to live and breathe, making the move from bookselling to publishing in 1997, when she joined Raincoast Books. In her five years at Raincoast she had various roles in the sales department, becoming sales manager in 1998 — just in time for the full Harry Potter Experience.

In 2002, she made the leap from Canadian publishing to the UK, where she found herself working in sales at TEXERE, a finance publisher based in Central London. After TEXERE was folded into a major conglomerate, she moved to art and gift publishing, taking on the role of Sales Manager at teNeues UK for nine years. After that, she took a detour through a spot of freelance licensing and sales repping for several years, and finally back into art and gift publishing in 2016 when she joined Laurence King Publishing as Sales Manager — just in time for the full Adult Colouring Book Experience.

In 2018 the siren call of home became too loud to ignore, and she returned to the West Coast of Canada — landing this time in the idyllic environs of Victoria. After a few months of getting acclimatized, she met Heather Read for a coffee, and shortly thereafter became the Co in Read + Co Books.